The Feast of Lots or Purim Card is from the The Feasts of Israel Fulfilled Collection at www.flowergirlgreetings.com

The celebration of the Feast of Lots or Purim (poo reem’) begins at sundown on March 9th this year. The first Feast of Purim was recorded in the Megillah, the Scroll of Esther.

This rich Collection of 8 cards celebrates the fulfillment of the Feasts of Israel by Yeshua (Jesus) the Messiah. The artwork on the front of each card was designed to convey Old and New Testament truth. The back of each card includes the story behind each feast and Yeshua's fulfillment of the feast. The inside of each card includes the English and Hebrew names of each feast, Scripture references, the artist’s notes and a celebration greeting! Each Collection includes a beautiful insert that explains the timeline of the feasts according to the Hebrew lunar calendar!

The Story of Esther
Purim is celebrated annually in late winter or early spring. The kingdom of Judah had been exiled to Babylonia. In 538 BC, king Cyrus gave an edict for the Jews to return to Jerusalem to rebuild the Temple. Nehemiah, Ezra and others returned, but many stayed. Esther and her cousin Mordecai were among the descendants of those who stayed.

Esther became queen of the vast Persian empire, a position that would influence the deliverance of the entire Jewish nation from their enemy, Haman, who was second only to the king.

Mordecai would not bow to Haman, so Haman plotted to have the entire Jewish nation annihilated. He determined the day of their destruction (Adar 13) by casting the Pur or lot.

Mordecai implored Esther to intervene saying, “Who knows whether you have attained royalty for such a time as this?” (Esther 4:14) Esther asked her people to fast for three days. After the three days, she would risk her life by summoning the king on their behalf.

When she came into the inner court of the king’s palace, he extended the golden scepter of favor to her. “So Esther came near and touched the top of the scepter.” (Esther 5:2)

A series of dramatic and miraculous reversals ensued. The day appointed for the Jews’ destruction became their day of victory! (Esther 9:1)  So, Mordecai declared the 14th and 15th of Adar to be annual days of rest and celebration!

Although God is not mentioned in the story of Esther, its message is clear—God remains faithful to His covenant people even in the midst of their unfaithfulness.

Messiah Yeshua calls us all into His family! “To as many as received Him, to them He gave the right to become children of God...” (John 1:12)  He “delivered us from the domain of darkness and transferred us to the kingdom of His beloved Son in whom we have redemption, the forgiveness of sins.” (Colossians 1:13-14) To His throne of grace, we can now draw near with confidence to receive mercy and find grace to help in time of need.” (Hebrews 4:16)

The Story of the Art Process for the Purim Art Card
Esther found favor in the king’s sight, and he extended the golden scepter to her. “So Esther came near and touched the top of the scepter.” (Esther 5:2)  The artwork on the front of the card represents this pivotal act that took place within the extravagant interior of the Persian palace.

I created the Purim card differently than any other art piece I’ve created in my life. Here is how I can best describe its creation: 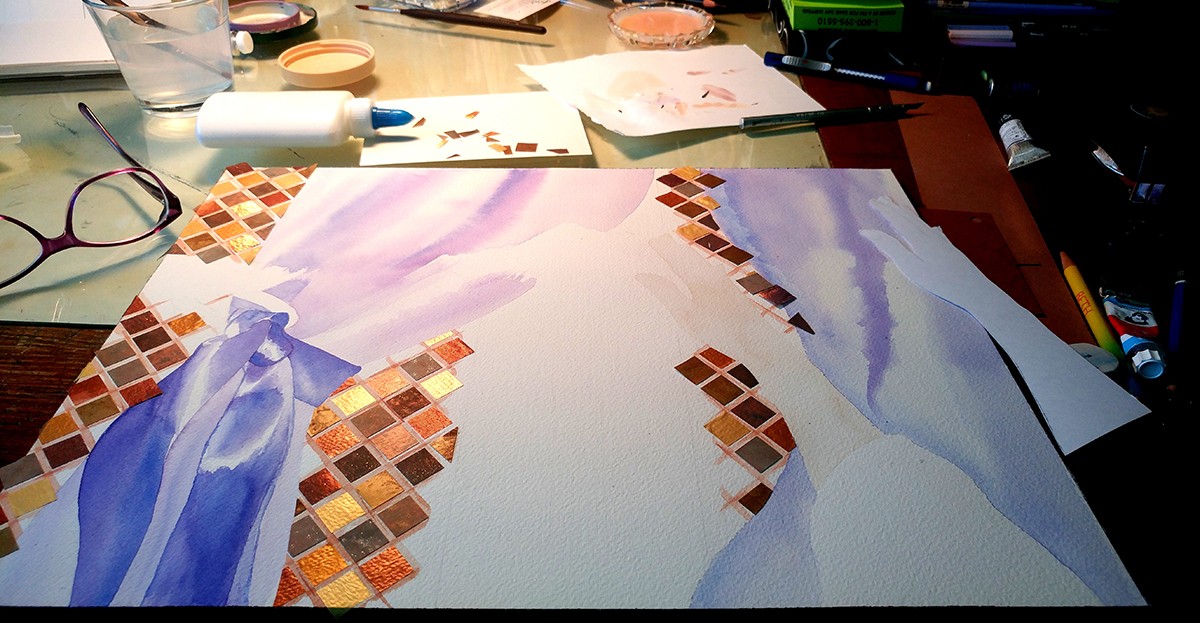 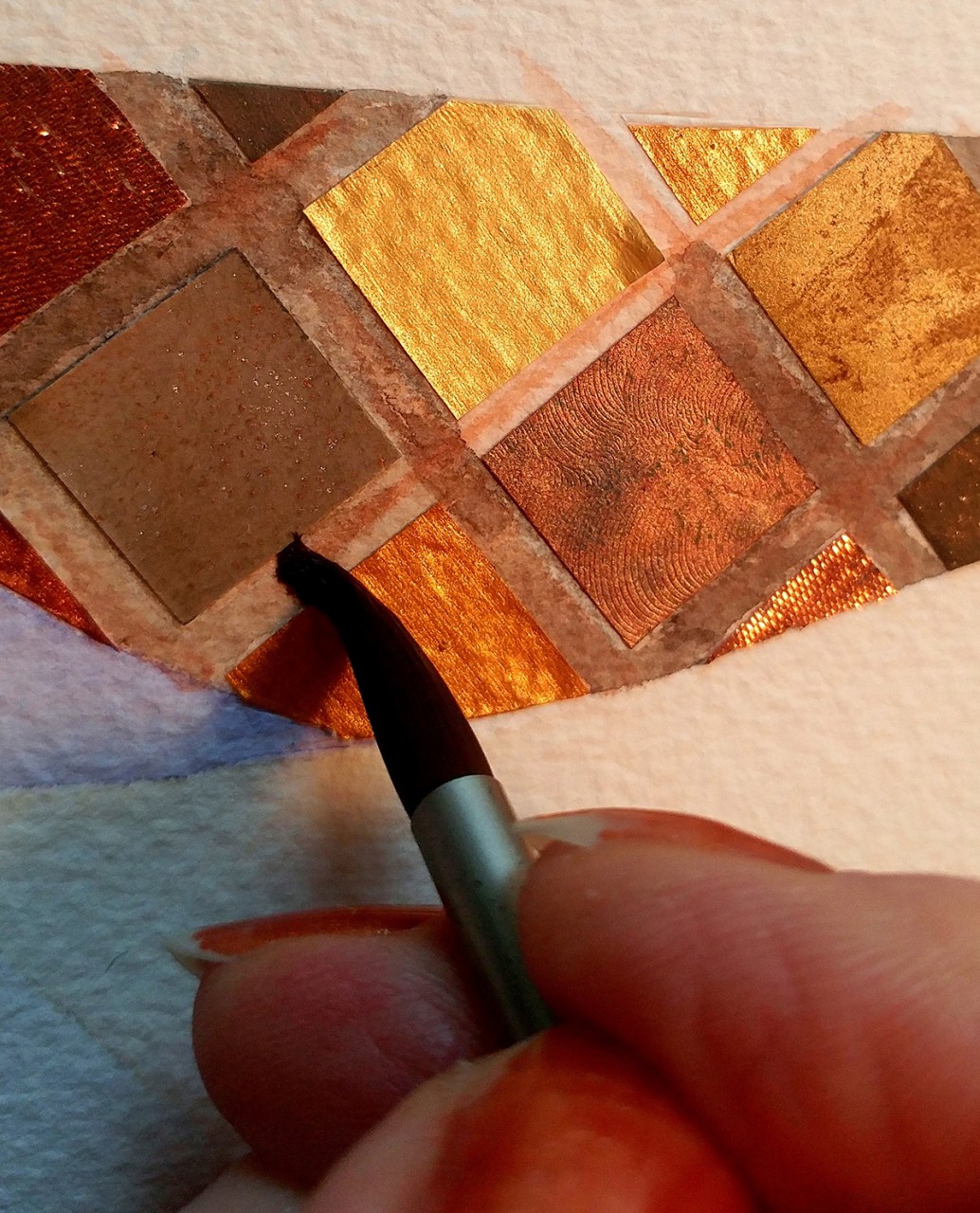 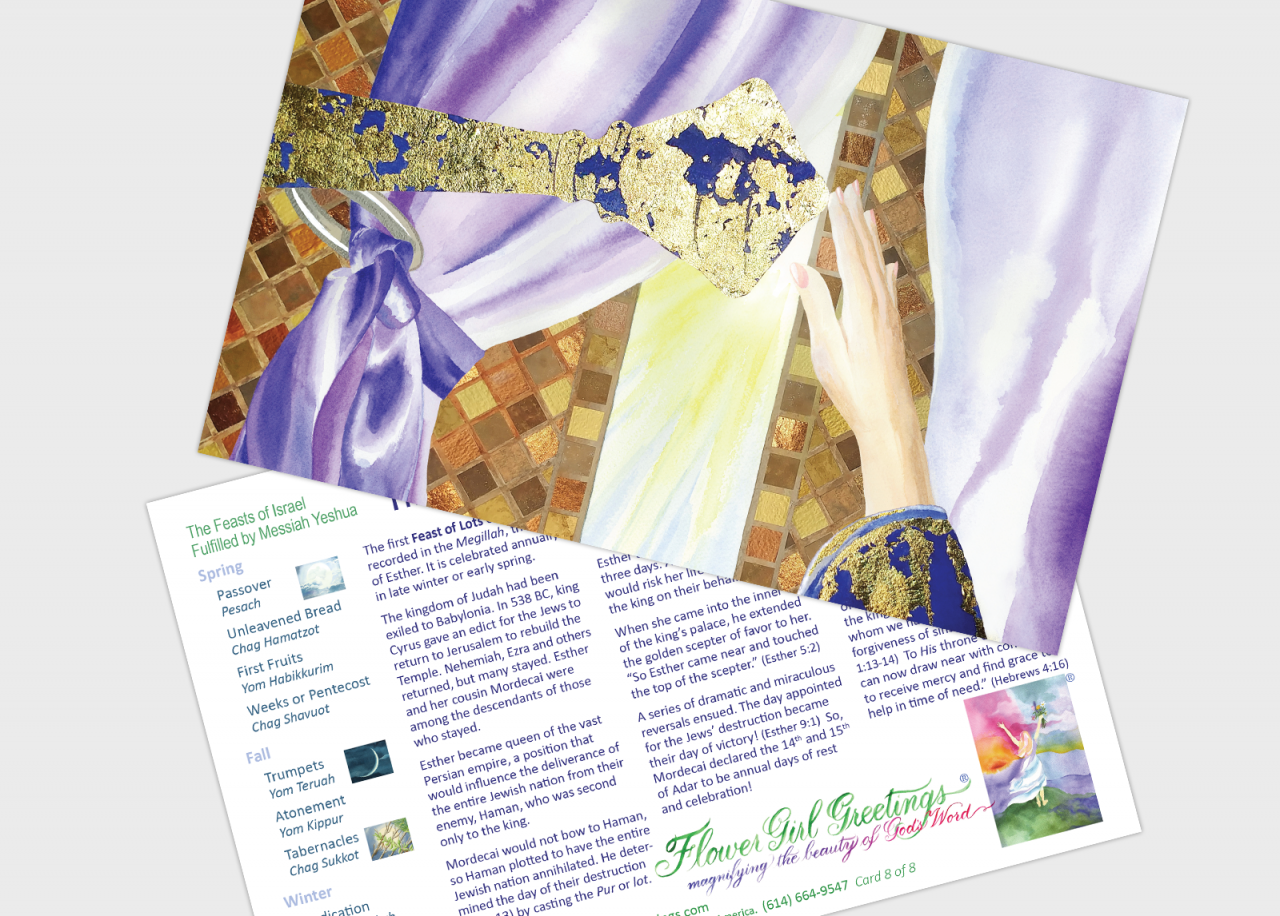 The Story of another Esther
My grandmother Esther passed away in 2000 at the age of 98½. She had a very hard life, but in her early 40s, a pastor and his wife reached out to her with incredible love, and she met Jesus her Savior. She became a light to our family with her consistent prayers on our behalf. I remember not appreciating her constant talking about “The Lord.” But her faithful prayers finally availed for me!

After her stroke, I would go to the care facility and sing hymns to her often, which she loved. She would swing her hands to the sound of my voice. She would also point me to sing to the others around her, because she wanted them to hear of God’s love (still evangelizing!). As a young girl, she had worked in the fabric factories or mills in Connecticut, so her eyes brightened when she noticed the fabric of my clothes and ran her hand across the texture. When she had been able, she sewed doll clothes for me by hand with no patterns. What I would do now to have those dresses! I remember her wrinkled hands sewing a white dress with tiny roses on it as I asked her to “please hurry up.” In her adverse circumstances, my grandmother radiated the love of God and stood for His truth. I am forever grateful to her. Now, it is my hands that are wrinkled just like hers. For Esther’s hand, I needed a reference, so I took the wrinkles and freckles out of mine!

The Story of Us!
As a child, Esther did not dream of being married to a pagan king and being one of many women in his harem. But her position as Queen brought about the deliverance of her people.

What circumstance have we wanted to change, but it hasn’t changed, either because of our choices or God’s sovereign plan?  What purpose will God fulfill in us through our “lot”?  There is much I’d like to change. I wish I had children. By now, I would have grandchildren. I wish my mother wasn’t so far away. I would like to sit with her and share life with her more often. BUT GOD… Every day He beckons us holding out His bright scepter of favor saying, “Come into my presence, my beloved and receive my love.”

These words may sound trite, especially in the middle of grief and pain, of late night hours with no sleep, of heartache, confusion and doubt.  Psalm 16:6 says, “The lines (my lot) have fallen to me in pleasant places; indeed, my heritage is beautiful to me.” One day, we will be in that Beautiful Land. This is our lot, our inheritance. Esther’s “lots” were actually like tossed coins for determining an outcome that was reversed by God in her favor. Our lot is Messiah Jesus Himself! He is the Lover of our souls, our portion and our inheritance now and always!

Sending love in Him,
Beth Ann

Love this - we were married 3-20-2011 which was also Purim. We specifically chose that day because of the story of Esther and the Jews. We want to purchase. Is this card only within the feast cards or are they also separate. We will order however available.

0 Cancel Reply
Love this - we were married 3-20-2011 which was also Purim. We specifically chose that day because of the story of Esther and the Jews. We want to purchase. Is this card only within the feast cards or are they also separate. We will order however available.
Cancel Update Comment

Thank you so much for your inquiry! This card may only be purchased within the collection. The artist will be contacting you via email shortly. Blessings!

0 Cancel Reply
Thank you so much for your inquiry! This card may only be purchased within the collection. The artist will be contacting you via email shortly. Blessings!
Cancel Update Comment

Hello again, Yvonne! Blessings as your anniversary approaches! If you still want an Esther card, the best way to order would be to order something else, and then I'll slip the card in the package, since you cannot specify this individual card on our website (Our minimum postage in $8...trackable USPS)
warmly, Beth Ann

0 Cancel Reply
Hello again, Yvonne! Blessings as your anniversary approaches! If you still want an Esther card, the best way to order would be to order something else, and then I'll slip the card in the package, since you cannot specify this individual card on our website (Our minimum postage in $8...trackable USPS) warmly, Beth Ann
Cancel Update Comment

By accepting you will be accessing a service provided by a third-party external to https://flowergirlgreetings.com/

Dear friends, all of the new art and writings for this blog are now found at my website shalefragments.com